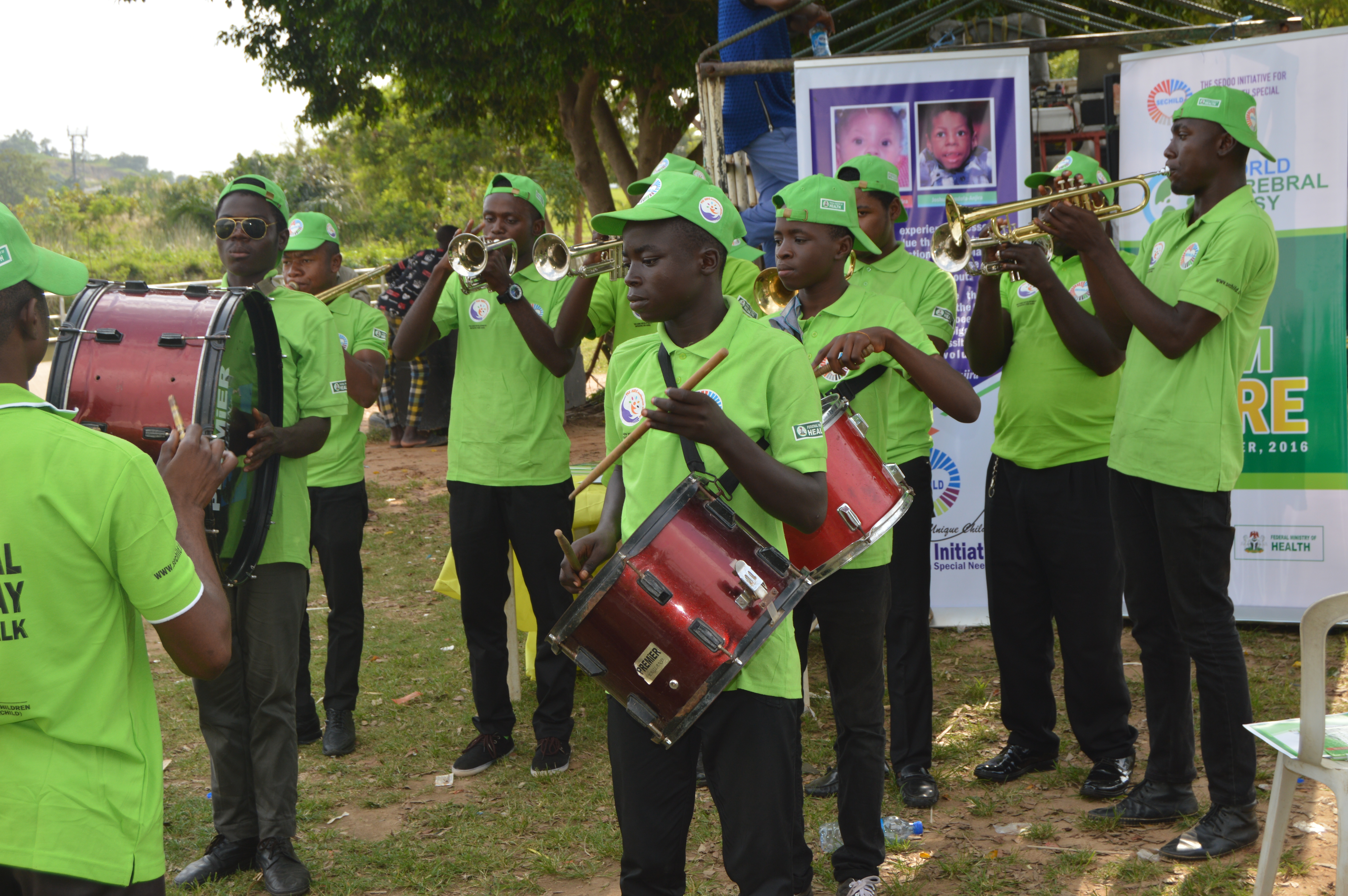 Cerebral palsy is one of the least understood disabilities and people with cerebral palsy are often out of sight, out of mind and out of options in communities around the world. This needs to change.
World Cerebral Palsy Day on 6th October was created by the Cerebral Palsy Alliance in 2012 and now brings together people living with cerebral palsy, their families, allies, supporters and organizations across more than 100 countries.

All with the aim to ensure a future in which children and adults with Cerebral Palsy have the same rights, access and opportunities as anyone else in our society.

Cerebral Palsy is a lifelong disability and there is no known cure.
World Cerebral Palsy Day is celebrated annually every first Wednesday of October. People around the world come together to celebrate and support those living with Cerebral Palsy, embrace diversity and to help create a more accessible future for everyone.
.
It was founded on October 6th, 2012, and is now an annual event that celebrates those who have cerebral palsy (CP). “Through World CP Day, we have the opportunity to raise awareness of CP in our communities and assist others to look beyond the disability.” Each year a theme is highlighted on the important Cerebral Palsy issue on the World Cerebral Palsy Day.

The Sedoo Initiative for Children with Special Needs-SECHILD in view of her advocacy for the rights of children living with cerebral palsy and other disabilities celebrates World Cerebral Palsy Day yearly. In 2016 supported by Federal Ministry of Health, Human Rights Commission, Yes Kids and Children with special needs along with their families and care givers SECHILD celebrated elaborately the world CP Day in colour and style.

On Wednesday, the 5th of October 2016 over 200 participants including parents and care givers of children with special needs and other stake holders assembled at about 8.00 am at Federal Ministry of Health, Federal Secretariat Shehu Shagari Way, Abuja for the kickoff of World CP Day advocacy and awareness walk. The walk was flagged off by the Hon. Minister of Health. Participants worked from Federal Secretariat along Shehu Shagari Way through Transcorp Hilton Hotel to the National Human Rights Commission on Ironsi Street, Maitama-Abuja with awareness music and dance led by a band.

At the NHRC, the Executive Secretary of National Human Rights Commission received the participants at the gate and ushered them into the commission’s conference room for an advocacy and interaction session. This session commenced with an opening prayer by the Chairman/BOT of SECHILD Barr. Aver Gavar. Welcoming SECHILD and all stakeholders to the interactive session. The Executive Secretary of National Human Rights Commission stated the commission’s commitment to ensure that children with special needs and indeed all persons with disabilities are accorded their rightful place in the society and declared partnership with SECHILD in the promotion of the rights of these categories of children.

In responding the President and founder of SECHILD Kawan Aondofa-Anjira (Mrs.) said the Sedoo Initiative for Children with Special Needs-SECHILD was conceived and developed from their experience her husband Aondofa and her in nursing TWO of their four children Sedoo and Aondofa who were born with some diagnostic category that made them children with special needs. Sedoo (to whom this Organization is named. Sedoo, their precious and pretty Daughter was born on August 22, 2005 with Cerebral Palsy while her brother Aondofa Joshua was born on January 18th 2007 also with Cerebral Palsy.

She explained that SECHILD which is established with personal funds is an experience-based NGO of a couple caring for two children born with special needs in a society where there is so much ignorance, nonexistent of support centers, lack of awareness on such condition and the painful, difficult and most challenging raising such children.

According to the President Kawan Aondofa-Anjira Mrs, ignorance, nonexistent of support centers, traditional myths, absence of professional assistance and the frustration of raising of raising such children coupled with firsthand experience of the trauma and painful experience of what parents and care givers especially mothers of children with special needs go through in caring for these children and the desire to establish an institution for similar children with the reservoir that provides children with cerebral palsy and other disorders, families and their caregivers with access to comprehensive information and resources led to the founding of SECHILD. She said the experience is emotionally drenching, frustrating, challenging, painful, financial tasking, time consuming and very demanding.

Kawan Aondofa-Anjira (Mrs.), President and founder said the Sedoo Initiative for Children with Special Needs is registered by the Corporate Affairs Commission under part “C’ of the Companies and Allied Matters Act 1990 RC No. 42610 as a not-for-profit, community driven development and non-governmental charitable organization committed to an often neglected target group within the Nigerian Society; vulnerable local children with special needs focused on improving the lives of children with special needs/persons including those with disabilities. The prgramme is to help these children regardless of their condition and needs.

SECHILD’s mission is to improve and promote the health and well-being of children with special health care needs and their families. The organization focuses on providing information to families and health care professionals. SECHILD’s work includes special projects, information, research and evaluation that impact care and support, quality of care, education and family partnerships in health care and support for children with special needs. In doing this, SECHILD is building bridges of partnerships and collaboration with a variety of groups to plan and implement grants and projects that improve care and increase access to support such children and their families.

Kawan Aondofa-Anjira (Mrs.) said establishing SECHILD was out of a burning desire to fill in the gap with a lot of sacrifices and the NGOs growth and sustenance is dependent on partnership and support from government, corporate bodies, individuals, and NGOs. She therefore, called on all stake holders, well-meaning, spirited individuals and government agencies to partner with the Initiative to enable them reach a larger number of affected children. She said their efforts is more of private funding which the result will not be as much as supported and partnered with.

She thanked the Executive Secretary of NHRC for the partnership and prayed for more committed efforts in the promotion of the rights of children with special needs.

The interactive session brought together members of civil society groups, governmental representatives, community dwellers, media personnel’s, gender experts, Therapists, change experts, children with cerebral palsy and other related disabilities alongside their parents and caregivers. The session focused on an overview of the Nigerian child living with cerebral palsy and other related disabilities as the President of SECHILD and expert facilitators brought to light the current state of the Nigerian child/individual living with disability alongside their parents and caregivers’ perspective. Ministry of Health and National Human Rights Communication and other prominent participants at the end of the interaction adopted a communiqué with the following recommendations:

a. A recognition and development of strategies for promoting the rights of children with special needs and individuals living with disabilities.
b. The role of Government in ensuring proper sensitization and implementation of special needs rights.
c. The inclusion of children with special needs mainstreaming based on recognition of their rights.
d. Disability and gender-based violence consideration should be given prominence to bring about increased efficiency and sustainability as it contributes to women involvement and commitment.
e. Laws and policies should be enforced with partnership of the local communities towards the uplifting of human rights of persons with disability and preservation.
f. Provision of support to persons with disabilities alongside their parents and caregivers
g. Increase awareness about the condition of cerebral palsy and re-orientation about superstitious, traditional beliefs and myths
h. Sources and sustained campaign against the abandoning and outright killing of children with special needs.
i. Incorporate special education into the school curricular involving youth, children and people from the grassroots.

The Cerebral Palsy care policy document was delivered to the Hon. Minister of Health with a response from him.

There were goodwill and advocacy messages from NAPTIP, parents of children with disabilities, partners, Federal Ministry of Women Affairs, Sister NGOs and other participants.

A resource person gave a brief on what Cerebral Palsy is and the President of SECHILD made the advocacy demands on the rights of children with Cerebral Palsy. The Executive Secretary of Human Rights assured all that the commission would be committed to promoting the rights of those living with cerebral palsy and other relayed disabilities.